Tonight, Thursday the 11th, the Glendale Design Review Board REJECTED the proposed house location and told the developer, Sorry Charlie, no house is going on top of that hill.  Forget it.

Thanks to everybody who attended the meeting and who sent emails, the response was overwhelming and a huge message was sent!

And Thank You Design Review Board!!!!

Two years ago the Glendale Planning Commission said NO to this proposed development because placement of the structure at this site would have compromised the forested hillside. 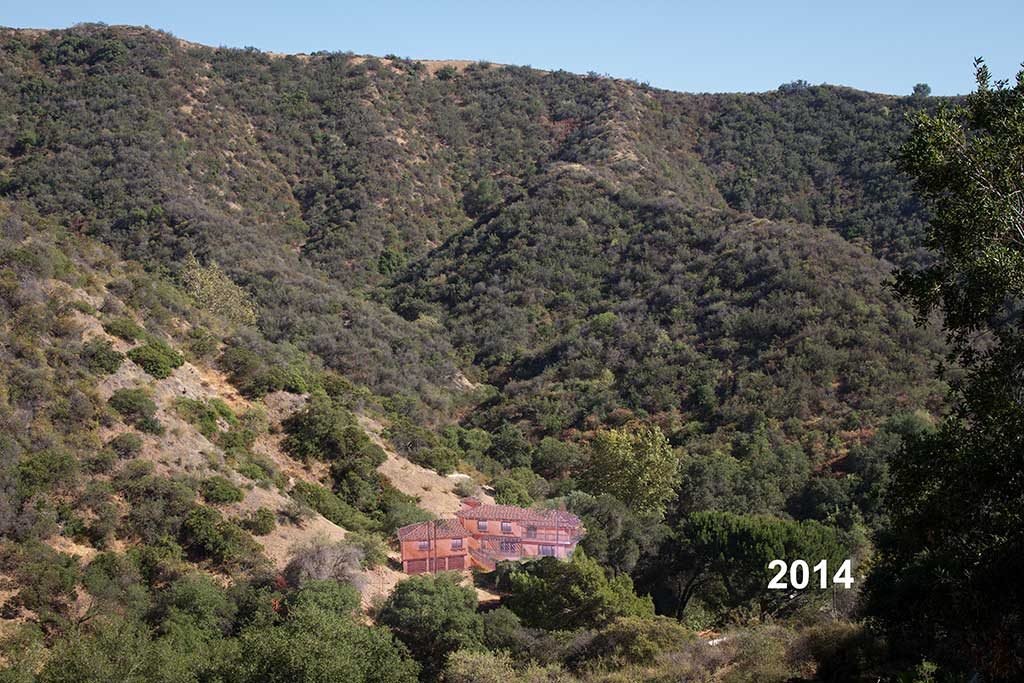 Now two years later the developer is back, proposing a home ON THE EXACT SAME SPOT as was previously vetoed.

At 5:00pm this Thursday, August 11, the city’s Design Review Board (DRB) will approve or deny the construction of a new home on Laird Drive.  The CCEA and concerned neighbors have repeatedly opposed this project for 2 ½  years because its location behind and above existing homes would eliminate the privacy those homes have enjoyed for many years and would compromise the forested hillside that is part of the Chevy Chase Canyon charm.  Another reason this project should be denied is because of the precedent it would set for other developers who are not concerned about preserving the woodland character of the Canyon.  They are hoping for an opportunity to build on hillside areas that have historically been off limits.  If this project is allowed to move forward, they will get that opportunity.

Send email objecting to this project to:  kduarte@glendaleca.gov

Allowing the construction of this home on a hillside above and behind existing homes and easily visible from across the canyon would set a precedent that would allow further encroachment on the beautiful hillsides of Chevy Chase Canyon and would compromise the privacy of existing homes.

In a previous hearing before the Planning Commission, this project was deemed incompatible with the neighborhood and denied.

“The location up the hill, away from the streets, also is incompatible with the neighborhood where most of the houses are close to the street frontage.  The visual mass of the house is incompatible with the neighborhood in that the house is up the slope in a more prominent and visible location on the hillside than if it were situated lower on the property.” Planning Commission, August, 2014

The illegally graded hillside has never been restored to its original condition as ordered by the Public Works Department, so it is unclear how much earth has already been displaced.  This makes an evaluation of allowable grading for any project difficult.  In addition, if not already done, a certified survey by a third party should be performed in order to determine the present slopes of the modified hillside.

Project Visibility Would Be Objectionable

This item relates directly to one of the tests included in hillside development review, “ d. Site Plans for development of property on steep slopes shall take into account the visual impact on surrounding properties.”

“The location of the house up the slope, away from the street frontages, makes the house more visible to more properties than if it were located closer to the street.  The size of the house also increases its visibility and makes the house less compatible with the neighboring houses which are located in less prominent locations.” Planning Commission, August, 2014

Since this and adjoining properties form a natural rain runoff collection point with a history of heavy flooding and debris movement, a re-evaluation of the effects of rainwater drainage should be provided since the conformation of the hillside has been modified without the benefit of approved plans.

“Pay particular attention to drainage on hillside sites. Care should be taken not to impact adjacent properties.” Hillside Design Guidelines

Neighbors Do Not Contest Development of the Lot

The neighbors and the owner’s architect have had several meetings in order to determine the best plans for building a house that will satisfy the needs of the owner and the wishes of the neighbors. A plan located off of the hill and near the Laird Drive cul-de-sac was approved by the neighbors and the property owner, but apparently rejected by the city arborist.

Profile drawings are missing and don’t match, as noted in the Staff Report City Department Comments.

The Spirit of the Hillside Design Guidelines is not Observed

The proposed construction is not at the same level of surrounding houses and would be excessively prominent on the proposed site up on the hill above the other homes.

The plans submitted do not indicate adherence to proper terracing in order to minimize alteration to the existing landform.

“Cut and fill type grading is discouraged if its purpose is to revise the topography to create a flat pad.”

The proposed size and mass of the project, along with the location are not compatible with the surrounding homes.

“Relate new buildings (particularly if larger than existing context) to existing adjacent buildings through use of proportion, transition, or other design features.”

The CCEA again objects to this development on the basis of incompatibility (mass and scale, location) and compromised neighbor privacy, and calls for enforcement of the order to restore the property to its natural state.