Update – Project sent back to the drawing board once again!

The CCEA and concerned neighbors prevailed.  The Design Review Board voted to send the Laird Street project back for another redesign.  Thanks to all who wrote emails and attended the meeting.

Once again the project at 910 Laird will be held this 5 pm Thursday the 12th, at the MUNICIPAL SERVICES BUILDING – 633 E. Broadway, Room 105  And all are welcome!

If you can’t make this hearing please send your thoughts on this project to:   kduarte@glendaleca.gov

FOUR YEARS!  Concerned neighbors and the CCEA have been raising objections to a developer’s proposals to build at 910 Laird for the last four years.  You can read the brief history here.

Three months after the Design Review Board gave a thumbs-down sending their latest proposal back for a redesign because the structures placement up on the hill, and its general design were not compatible with Glendale’s Hillside Ordinance, the developer is back.  It’s claimed to be a redesign. 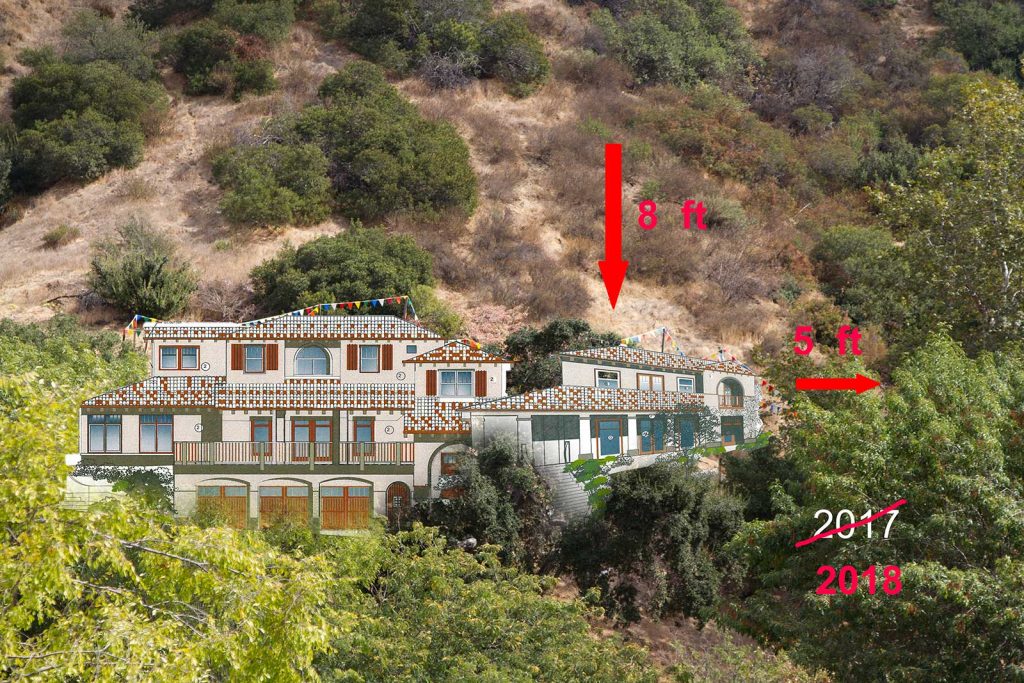 The garages have been moved to the center of the building, and the structure has been sunk into the hill 8 feet and moved west 5 feet.  Other than that it is pretty much the same house.  Needless to say, the CCEA and concerned neighbors are not pleased with these superficial changes.

This new submittal has raised alarms with Neighbors and the CCEA because it leaves intact an illegally graded driveway that traverses the lot, a drive that could potentially provide access to more development.  Had the redesign been a true makeover, and the house sited down the hillside as was suggested, it would have effectively blocked the illegal driveway.  But the house site wasn’t moved and the illegal driveway was saved. 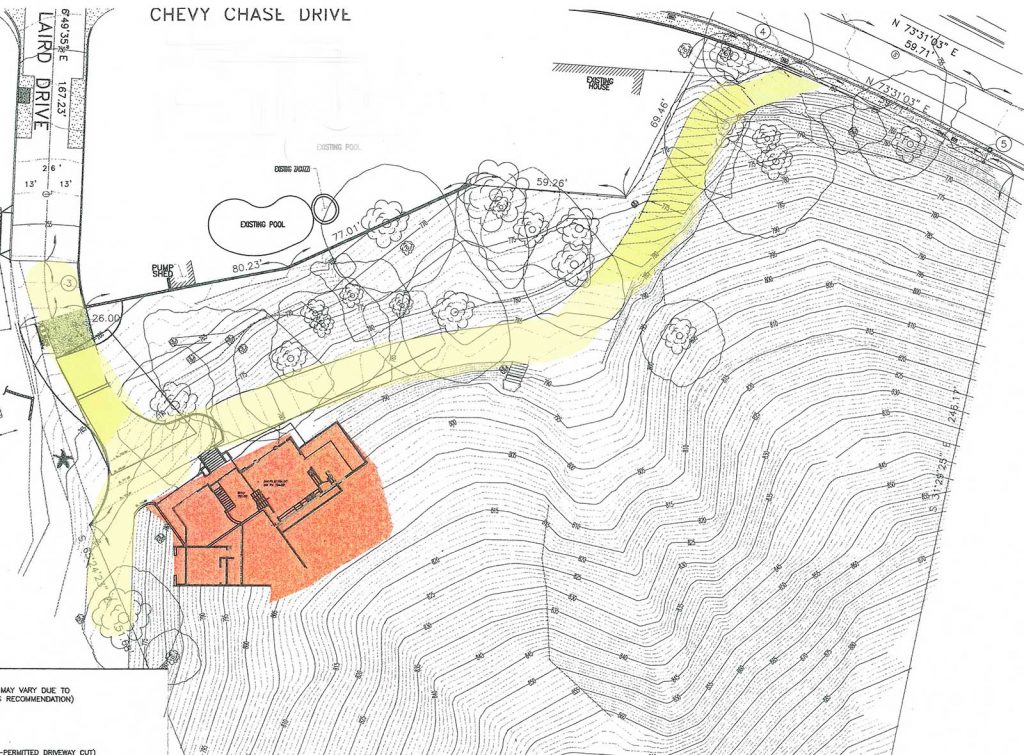 At 5:00 pm this Thursday, April the 12h, the city’s Design Review Board (DRB) will approve or deny the construction of a new home on Laird Drive.  The CCEA and concerned neighbors have repeatedly opposed this project for 4  years because its location behind and above existing homes would eliminate the privacy those homes have enjoyed for many years and would compromise the forested hillside that is part of the Chevy Chase Canyon charm.  Another reason this project should be denied is because of the precedent it would set for other developers who are not concerned about preserving the woodland character of the Canyon.  They are hoping for an opportunity to build on hillside areas that have historically been off limits.  If this project is allowed to move forward, they will get that opportunity.

The Chevy Chase Estates Association has continuously supported the Applicant’s right to develop the property at 910 Laird Drive, but the Applicant has repeatedly demonstrated his disdain for and rejection of the rules and regulations governing the development process. His irresponsible actions have led to a project that again does not conform to the spirit and intent of the Hillside Design Guidelines, leading the CCEA to continue its opposition and to call upon the Design Review Board to again reject the plans as submitted.

The Applicant’s extensive, unpermitted grading has allowed him to effectively expropriate the natural hillside for his own purposes, without the benefit of regulatory controls that preserve the natural terrain and maintain safety in the environment.  This attempt to bypass or subvert regulatory controls by fait accompli should not be tolerated because we now have slopes that previously did not exist, a significant cut for a driveway that shouldn’t be there, and many cubic yards irresponsibly dumped on city and neighbor property.  Public Works should enforce the citation issued to the Applicant and cause the topography to be restored so proper assessment and development of the site can proceed.

The Planning Commission and the Design Review Board’s repeated admonishments and directions to the Applicant to remedy questionable siting and other mass and scale issues have been met with a specious, minimally compliant response.  This Applicant has never demonstrated a sincere desire to maintain neighborhood compatibility by conforming to the codes that govern hillside projects and should therefore be prevented, once again, the opportunity to build a house in the wrong place and in a way that endangers neighbors, violates their privacy and degrades the forested environment of Chevy Chase Canyon.